The time of the great tides had passed. Melting glaciers had turned the large peninsula into a small island. The people who called themselves Lenape called this island Kioshk. Gull island. Nothing much grew on Kioshk to attract people. The gulls came to the sandbar because of the many oyster shells on the beach. Kioshk was three acres of soft clay and mud. After many centuries, some fisherfolk came to Kioshk to stake out their nets. Then, some hundreds of years later, people appeared from over the sea. They anchored their large ships and explored many of the islands. They noticed little Kioshk and they called it Little Oyster Island. After these people who called themselves Dutch left, other people came. Some men came from Swedeland or something like that. They couldn't say the people's name, which was Lenni Lenape. They said Renni Renape. It was all right. Didn't last too long. They didn't call Kioshk anything.

Another group of strangers came. These people came from someplace called that they called England and they called the small island Dyre's Island. They tried to change the Lenape's name to the strange new name of the Delaware Tribe. The Lenape continued to call themselves the Lenape, but they were amused that these people could never seem to make up their minds. The strangers changed the name of little Kioshk to Bucking Island. Then those people changed their minds about being English, too. The ones here wanted to separate themselves from the English ones there. Of course, they also decided to change the name of little Kioshk, again. By now, these frivolous changes were expected by the Lenape, who still remained in the area. This time, the new owner of Kioshk was a man who was busy and who sold many things. He sold barrels of excellent shad and herrings, cheap twine, spars for masts or bowsprits and something he called a pleasure sleigh. This busy man was called Samuel Ellis. After he bought Kioshk, the sandy little island got one more name and this one stuck: Ellis Island. 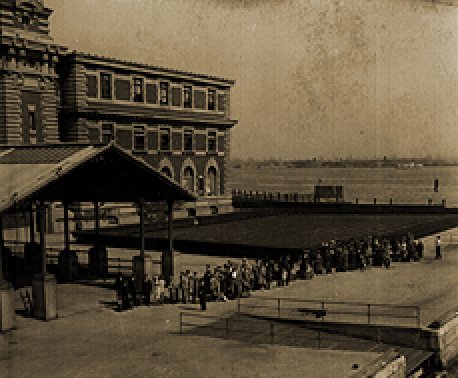 "Come to the Greatest party on Earth," read Emma Klimova slowly and carefully. She pronounced each English syllable as she had learned in her book. She shook her curly, reddish head in disapproval.

"But Tatinek, this poster says that the World's Columbian Exposition is next year, not this year! Didn't you tell us we were going to Chicago to see the Fair?"

Her father, Tatinek, started to smile.

"Anton! Explain to your sister why we should be there early in order to get the good seats!"

"And explain to your sister that we should be all settled in before the Fair begins. Neni pravdu?" The square-faced man smiled at his daughter. "And we are also coming to live here, not just for the Fair. You know that, Emma."

"I do not understand," Emma started again. "Columbus sailed to America in fourteen ninety- two. Why are they having this Fair in eighteen ninety-three?" She looked defiantly at her father, who talked of nothing but the wisdom of everything American.

"Well, Tatinek, are they too stupid here to know the difference between ninety-two and ninety-three?"

"Anton, explain to your sister that the Americans have a big job—just look at those posters!" He pointed at a poster. "Nothing like this Fair has ever been done and SHE is criticizing?"

"Tatinek, why are you asking Anton to tell everything to me that you just said with your own mouth?"

Anton started to say something. . .

"Because, hloupy slepice—you silly chicken, I don't wish to lose my temper in front of all these strange people! All the way from Prague you have done nothing but to ask why and to tell me how silly things are away from home. Well, new places are different! They are supposed to be different! That's why they are called new!"

"Tatinek is right!" Anton shouted, in order to get a word in. Emma shot him a stinging look.

"I will never say anything again!" Emma said, keeping her voice artificially calm. "In this new world, I will take a complete vow of silence. Will that please you all?" Emma folded her arms and turned her back to the rest of the family.

"Oh, Emma, Don't do that!" Julka, the baby sister, cried out in a scared, little voice.

"Julka, this is one promise that you don't have to worry about Emma keeping. Hah! Silent for life? Sarah Bernhardt here won't make it to one hour!" Anton knitted his bushy eyebrows, crossed his arms and turned his muscular back on Emma. Tatinek and the rest of the family began to chuckle.

Emma silently tapped her foot with tears streaking down her face. May owls roost in Anton's ears. . .May snails eat his entrails. . .Emma continued making up similar punishments for her brother as the others went back to watching their new surroundings.

Tatinek looked up at one of the huge posters which showed locomotives all streaming into Chicago from all points of the compass. Ignoring the turmoil and din around him at the immigrant processing hall, he smiled beatifically at the poster. They continued to inch along in an endless row of humanity. The rest of the Klima family were now looking at the old Romanian man who had just fainted. He had been wearing a heavy sheepskin coat in spite of the heat of the room that May day. As two uniformed police carried the old man out of the huge hall to the hospital on the island's far side, people parted on either side to let them through, murmuring or exclaiming loudly.

Tatinek never noticed any of this because he was studying the poster so intently. Julka, who was just six, kept tugging at her tatinek's sleeve. . . "That man! That man!" But Tatinek did not hear her. All those train engines pouring into Chicago. The Fair itself making Chicago a Window to the World. . .

"Jaromir! The baby is trying to talk to you!" yelled Maminka over the din of the crowd. But the fainted man had already been carried off. Tatinek blinked absent-mindedly and looked at all of them. Maminka snapped a few short words in his direction. He smiled and shrugged. The line began to move again and she straggled along next to him under her big bundles. Anton came next, craning his neck in every direction to avoid any eye contact with his patience-trying sister. Tatinek held the little Julka's hand. She had a bright yellow piece of cardboard with a number on it pinned on her jacket. They all had those. Families were huddled together according to these numbers. They were made to stand in groups according to those numbers. Voices yelled out the numbers in French, Russian, Lithuanian, Norwegian and many other languages. They inched forward. They opened the lunch boxes they had bought at the front entrance. They ate standing up in the lines.

Tatinek stood about five-feet-eight inches tall. His wife was five feet tall, if that. She had that washed-out look of many of the immigrant women. She was in her late thirties, but her face was wreathed in wrinkles, especially when she smiled. The wrinkles at the corners of her eyes traveled half-way down her cheeks. Emma was a tall fourteen-year-old. Julka was six years old. She had pale blonde hair cut in a bang that ran straight across her forehead and half around the sides, giving the impression that the person doing the cutting didn't know where to stop, and pigtails at the back of her hair. They finished their lunch in the line and, as the hours ticked by, the family made its way through all the inspections. The immigrant aid station helped Tatinek to find the window where train tickets might be purchased. Without one moment's hesitation, Tatinek plunked a large sum on the counter and asked for five tickets to Chicago. Tears rose in Tatinek's eyes as he said the word Chicago. Aside from the fact that it was one of the ten or so words that he knew in English, the very sound of that word had the ring of new beginnings.

Tatinek held out his hand for his change and the ticket agent asked for his name. After a couple tries, he said to the ticket agent: "Klima. Jaromir Klima." The old man pointed at the rest of his family and ticked off their names. "Anna, Emma, Julka, Anton. . .Klima." The ticket agent nodded and wrote all the names down. He handed Mister Klima five tickets for Chicago on a train leaving from the Central station of New York later that day. The agent gave Mister Klima a rough drawing of the streets over to the train station. Klima nodded his thanks and they were off. The air was quite warm for late May as the Klima family made its way across Long Island. They were able to understand enough of the signs to catch a horse car that brought them within ten blocks of the Central New York terminal.

"Have courage, Maminka!" Tatinek exclaimed to his wife when she stumbled once, under her bundles. The he had to break up a brief bout of slapping between Emma and Anton. Once they were inside the terminal, old Mister Klima was in heaven.

"Look, children, have you ever seen such a place? There must be a hundred trains here!" Tatinek crowed. Trains were of endless interest to him. They symbolized everything modern and capable of change. Change was in the air.

Change was on the mind of a group of Chicago's leading citizens that month. The boggy swamp which they had trekked out to inspect just that last January was beginning to look like something. At this time in history, potted trees and topiary bushes were considered an improvement on native eyesores such as grew in Jackson Park, south of Chicago. Chicago hired the best to do the landscaping for the World's Fair: one Frederick Law Olmsted. He had designed New York's Central Park and Prospect Park in the 1850's and 60's. They gave Mister Olmsted fifteen million dollars to do something dramatic with Jackson Park. Mountains of sand and natural dunes were moved around and tidied up. Native plants and shrubs were plowed under as slender cypresses in pots and other more classical floral were brought onto the grounds.

As work progressed, it was impossible to keep out the curious, so they were invited in. At a price of twenty-five cents. After not a single plant or shrub remained in that place which nature had put it, Mister Olmsted toured the grounds and pronounced them classical enough. The buildings were going up fast. Missus Bertha Palmer, the social queen of Chicago, made repeated tours of the Fair site to check the progress of the Woman's Building. Missus Palmer had been having no end of trouble with her architect, Sophia Hayden. When a strong hand was needed at the rudder, Bertha Palmer was always there to lend it. She was pleased when the Board of Commissioners decided to hold all buildings to a color scheme of white. The White City. Bertha liked the sound of that. It sounded restrained. Classical. Like Bertha herself. And besides, she knew that she looked elegant in white. White was the color of many things, among them new beginnings.